It's been a busy time since the last entry. Here is a piece which captures a few minutes during the Summer. 'Cafe by the Ardeche'.

Spring has arrived, vigorously ... my new hip is settling in well... and off we go again though never quite as before - se 'The last onion'.

Having passed 60 at Christmas I'm thinking that it is time to stop worriting on with questions of purpose and mortality, and simply get on with living. 'Re-Calibration' is my attempt to do just that.

Pastoral church newsletters are not usually considered ground breaking literature, but having sweated over this one I thought  it might be of interest to a wider readership than the Norwich Area churches for whom it is intended.

A day of hot, crackling sun which reminds me of other days like this from a long time ago. The border pinks from our childhood garden which are now blooming here in Pakefield reinforces that good memory. See 'Pink Buttonholes'.

After weeks of waiting and willing the peony buds to open out into blooms today seems to be the day!

Also a hand out which accompanied two Praying with clay workshops held last Sarurday at the  URC Eastern Synod day out in Cambridge. No expertise was offered by me or required by the particpants but, rather like the peony, creativity bloomed anyway.

A new week and a new poem relating how events of some 30 years ago came to an unexpected resolution - see 'Miss G's Revenge'. This is followed by a collection of pieces produced for last year's May Day event at the Seagull Theatre.

Spring is well under way, the sun shines and a quiet few hours have enabled the website to go live. You will see that it is far from complete but some recent material is now available and other archive stuff will appear soon.

After many months offline the fosten.com website 'Heaven in Ordinarie' is gradually returning. The new site will grow as and when I acquire some 'how to do it' knowledge and find a few moments in which to post material

If you have always wanted to ask me something, now is the time to go for it!
ian@fosten.com

Poetry, articles, videos and other miscellany from Ian Fosten 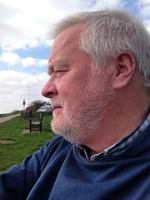 Welcome to this website. The title. 'Heaven in Ordinarie' is borrowed from the 16/17th century clergyman poet George Herbert. In his sonnet, 'Prayer', he harvests his experience and then offers up a basket full of images, none of which explain prayer, but all of which provide a fragment of understanding. 'Heaven in ordinarie ...' is one of those fragments.

Like Herbert, my working life has been within a variety of church settings - and when church is about community, faith, generosity and understanding it is a good place to be. When religion assumes the role of master rather than enabling servant, it is not.

From a very young age 'God stuff' has made as much sense to me out of doors, in real life events, in songs and poetry as it has within the confines of doctrine and religious tradition - quite often, much more so. Consequently my purpose in writing is to record that 'sense-making' and offer to anyone who choses to loiter here some glimpses of 'heaven in ordinarie'.

Cafe by the Ardeche

As a new day quietly forms

I leave my family asleep

and slip into the village

The boulangerie is also a cafe

and, with uncommitted time to spend

I settle down for criossants dipped

Despite this early hour, the local butcher

is deep in earnest conversation

with the village policemen and the man

who's just set up his market stall.

And, even though I can't unpick their words,

I feel the vital energy of their conversation,

as all the while the sun climbs high enough

to resurrect the river, the bridge, the day.

This listening, watching time draws to a close,

and so I settle up and set off homeward

carrying bread to share from where bread and life

have already, memorably, been blessed and broken open.

Today is the day they usually

made and shared a curry. And

in this limbo land of alone-ness,

and for the sake of continuity,

she assembles the ingredients

She reaches into the basket

and finds the onion, the last onion,

the final, tangible evidence of his

Her fingers close around the

dry outer skin - as he had so

taken, twisted and prepared it

not so very long ago.

She pauses, caught between

today's brave task of making the most,

and yesterday's bright eyes beneath

a jauntily angled cap, the smell of earth

and annual provision.  Through tears,

twice prompted, she takes the onion,

cooks the meal and endures,

for all that is not lost, the taste

There are no entries yet.

For a lifetime, until now, the obvious project

has been to marshal skills

and opportunities; to mix in effort

and an eye for the main chance; some

careful listening for the right tune,

the right possibility, the right coincidence

of disparate fragments from which to form

And would that then be an end to searching?

A portal opening onto supercharged performance?

A time for fame and accolade?

A fanfare of arrival or, perhaps, a time to touch the Sun -

and burst into an arc of flame?

for glancing back over a shoulder; for noticing

the route from birth to here is not

a wondrous highway,  crossing continents and

reaching for the stars, but, rather more a path

of where it all began?

behind the driving question: 'Where to now?'

For where we come from, where we go, is only ever

For once all forward motion is suspended in favour

of simply being, here and now. And in this unfamiliar pause

I notice that the anxious screech of life's anxiety fades

while in its place is heard, at last, timeless and unfathomable,

the music of Shalom.

So many footfalls have planted, unconsciously,

their mark upon this place.

has triggered a resonance which echoes

within the passing years and makes

a bridge between what was,

what is and what is yet to be.

This day I tread where you

and countless others have stood:

I sense the subtlest tremor in the land,

a strange at-home-ness through the soles

of my feet - a benign familiarity where

(I would have said) I had not previously trod;

an un-remembered kinship with the past.

And, having stood and waited purposefully

in this place, I journey home only to find that

home has been extended and enlarged: the walls

and boundaries are the same but beneath my feet

what once felt solid and unyielding has become porous

me and mine and all who've yet to come this way.

In memory the Anniversary Day

would be hot sun that

While yet the grass remained

a scissored choice was made;

a snip, a twist of silver foil,

the deed was done.

For weeks we had rehearsed

“We are the Peacemakers!”, youthful

Now, if I try or work up a pretence

more certainly the taste of

an ancient song to younger ears,

if heard at all by those who have

so much - much less.

and memories of a crowded church

where God was celebrated

She had become my enemy

(though she was dearly loved by students whom she'd taught)

for with advancing years

and solitary living her critical eye

had drained resources from a generous view

of other people's actions - mine, for sure.

by posted notes outlining my inadequacies and faults,

until the day I bearded her in her den

and faced a choice -

either I dismantled her unjust accusations, one by one,

or I pitied her alone-ness and let her be ...

I chose the latter course and we declared

Later on she offered me a cupboard,

a wooden cube, large and unwieldy.

Politeness led me to accept

has accompanied me from place to place,

never having a proper use, always

Until I was presented with the possibility of release:

the cupboard's space was needed - finally it had to go.

And so one windless dusk, full-primed with newsprint

and loaded with cuttings from a hateful tree,

I set the match .... and how the cupboard roared

and flared as flames shot twelve feet in the air

and scorched me with intense heat.

So mighty was the conflagration it did not last for long

and I, well warmed by fire and achievement,

sat back and toasted the departure of the past.

Next morning, just at breakfast time,

the doorbell rang and on the doorstep

stood a neighbour with some words to say.

and his garden full of ash.

Fulsomely I apologised and he left, his anger vented,

my pounding heart in over-drive, and, in some celestial roost,

A preface to 'Timothy Winters' by Charles Causley and dedicated to the courage, conviction and memory of Kitty and Tom Higdon and the children of the Burston School Strike 1914 - 1939.

the Sponsor's logo is displayed

This is more than a game;

at stake is life, death and, more importantly,

power, reputation, control and a place in history.

Here is the playing field where

where innocent enthusiasm can be  distorted

where dreams and wonder are replaced by

THOSE THINGS YOU NEED TO KNOW.

The outcome of the match will be the raw material

from which your league tables can be ground.

a ball is placed upon the centre spot -

it bears a child's face.

The Children at Chare Ends

I pictured the children

(through His eyes it seemed)

and mould and cast

and make of crumbly,

I heard His voice,

(shovel them or slap them

With eyes as wide as a football-pool,

A blitz of a boy is Timothy Winters.

His belly is white, his neck is dark,

And his hair is an exclamation-mark.

His clothes are enough to scare a crow

And through his britches the blue winds blow.

When teacher talks he won't hear a word

And he shoots down dead the arithmetic-bird,

He licks the pattern off his plate

And he's not even heard of the Welfare State.

And he lives in a house on Suez Street,

He sleeps in a sack on the kitchen floor

And they say there aren't boys like him anymore.

And his missus ran off with a bombardier,

Grandma sits in the grate with a gin

And Timothy's dosed with an aspirin.

But the law's as tricky as a ten-foot snake,

So Timothy Winters drinks his cup

And slowly goes on growing up.

At Morning Prayers the Master helves

for children less fortunate than ourselves,

And the loudest response in the room is when

So come one angel, come on ten