Ah, yes, a rather full five years have elapsed since the last update. Way too much to cover in this setting. So I'll just add some pieces from those years and then make it my intention to use and add to the site more often from now on.

It's been a busy time since the last entry. Here is a piece which captures a few minutes during the Summer. 'Cafe by the Ardeche'.

Spring has arrived, vigorously ... my new hip is settling in well... and off we go again though never quite as before - se 'The last onion'.

Having passed 60 at Christmas I'm thinking that it is time to stop worriting on with questions of purpose and mortality, and simply get on with living. 'Re-Calibration' is my attempt to do just that.

Pastoral church newsletters are not usually considered ground breaking literature, but having sweated over this one I thought  it might be of interest to a wider readership than the Norwich Area churches for whom it is intended.

A day of hot, crackling sun which reminds me of other days like this from a long time ago. The border pinks from our childhood garden which are now blooming here in Pakefield reinforces that good memory. See 'Pink Buttonholes'.

After weeks of waiting and willing the peony buds to open out into blooms today seems to be the day!

Also a hand out which accompanied two Praying with clay workshops held last Sarurday at the  URC Eastern Synod day out in Cambridge. No expertise was offered by me or required by the particpants but, rather like the peony, creativity bloomed anyway.

A new week and a new poem relating how events of some 30 years ago came to an unexpected resolution - see 'Miss G's Revenge'. This is followed by a collection of pieces produced for last year's May Day event at the Seagull Theatre.

Spring is well under way, the sun shines and a quiet few hours have enabled the website to go live. You will see that it is far from complete but some recent material is now available and other archive stuff will appear soon.

After many months offline the fosten.com website 'Heaven in Ordinarie' is gradually returning. The new site will grow as and when I acquire some 'how to do it' knowledge and find a few moments in which to post material

If you have always wanted to ask me something, now is the time to go for it!
ian@fosten.com

A Good Question – ‘Are you afraid of dying?’    Reform magazine November 2019

The simple, honest and immediate answer to this question is, ‘Yes!”  Despite living in a safer and more secure environment than most other occupants of the globe, I have had, for as long as I can recall, a close-to-the-surface sense of the fragility of life  - we are only ever one false step, one mis-calculation, one exposure to the wrong bacteria, one moment of being in the wrong place at the wrong time, away from our ending.

However, facing and stating that reality has not led me into a life of caution and fearfulness – in fact, quite the opposite. If the duration and quality of life comes with no long term guarantee, then, I reason, it is best that I get on each day with living it as fully and as well as I can. Jesus’ ‘Parable of the Talents’ in Matthew 25 encourages me to see that such time and opportunities that I have access to are given as perishable gifts, and, more importantly, gifts for which I am accountable. They are made valid only when they are used productively. I’m not just thinking here about self-evidently ‘good works’, I’m thinking more broadly about loving whole-heatedly, about thinking deeply and creatively, and about delighting, day by day by day, in what George Herbert described as ‘heaven in ordinarie’ when that is found in people, places and events. To be honest, any fear I may have of dying is easily eclipsed by what I believe would be a devastating sense of regret if all that was good, beautiful and of God had passed me by unnoticed.

So, yes, I am afraid of dying – I have accompanied people to their final breath and have shared with too many grieving loved ones to be blasé or triumphalist about death, and I would very much prefer not to experience it at first hand any time soon. When it does come, I hope and pray that I shall have some of the extraordinary grace and peace that I’ve been privileged to see in others as they have come to their own ending.

Meanwhile, I am content to park my discomfort with death alongside the resurrection stories in the Gospels. For all their ambiguity, these stories of the risen Jesus speak truthfully to me of the continuity of God’s love for all that God has made – even me. More than that I cannot, and need not say – besides, I must not spend any more time lingering with dying, I have a life to get on with living! 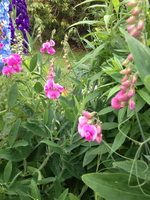 For more than 30 years I have carried out countless bereavement visits and funerals as part of everyday pastoral ministry. I have been moved, humbled, challenged and sometimes deeply disturbed by people's response to dying, death and questions of eternity. These days the sharpness of my own response is honed each morning as the face that stares blearily out from the bathroom mirror reminds me that the fresh faced youth I was once is a somewhat distant memory.  Whenever I walk the cliff top path near my home I am intrigued and, if I am to be honest, sometimes irked by the impromptu shines of fading flowers, balloons and other memorabilia tied to benches and bushes in honour of people long dead but clearly not forgotten.

Today I find that I am no longer able to brush off hearty, well meant speculations about the geography and activity of heaven as harmless wishful thinking - 'Old Bill will be up there now tending God's vegetable plot '....or, 'little Grace will be playing happily with all the other small children who went to be with Jesus prior to reaching double figures on Earth ...' - without yearning for a better and more honest way of dealing with these issues.  At the same time, the increasingly popular stance of some Christians and non-believers alike that this life is all that there is and nothing lies beyond seems inadequate and absurd. An intuitive sense of human purpose and the testimony of Christian understanding and experience propel me in the direction of finding a language with which to speak of death and eternity with conviction and not embarrassment, and without the need to request that hearers suspend rational thought for this topic of conversation.  Where this pursuit is taking me is into the realisation that in this territory where so little can be known, to say less speculatively is actually to say more helpfully.

When my mother died two years ago I felt no strong need to retain many physical mementos of her life or of the family home that my parents had shaped for nearly 60 years.  What I did feel moved to conserve were some token elements from the garden. It was only ever an ordinary suburban back garden and yet it was populated with so many memories - of the games we had played there as children, of plants and shrubs which had arrived as gifts or cuttings or 'thank yous' for some kindness shown, and of the last mortal remains of both parents, rescued from the bleak sterility of a crematorium and interred discretely amongst the roots of a favourite tree.  On our last visit to the house before it was to be sold I hastily dug up some late Autumn remnants. At home in Lowestoft I planted these unpromising specimens in a part of our garden recently laid waste by building work.

Winter passed and with the coming of Spring I added some bought plants and enjoyed watching that one time piece of waste ground as tentatively it brought structure, colour and vitality into the garden. It was clear to me that this was not a memorial, nor a vague mystical link to those who had gone before so much as a simple, wholesome declaration that continuity is a principle which underpins, informs and sustains human life and, indeed, the whole of Creation. In this I realised that I was merely mirroring my Mother's own approach to garden design which was to cultivate a living presence of people, places and events through serendipitous acquisitions over the course of her life.

Earlier this year my mother-in-law died and to the patch of ground were added a number of sculptures which she had created or owned. As these sculptures blended with the plants the label 'continuity garden' became yet more established, as way of describing both that re-claimed space and my understanding of these profound issues.

I have never doubted the resurrection stories of Jesus, not because I find the idea of a corpse resuming normal life easily credible in any rational sense, but because that is not quite the tale the gospel writers tell. If we read what the stories actually say we encounter a Jesus who is both tangibly present with his friends and yet significantly changed. A theme common to virtually all the resurrection appearances is that Jesus is at first unrecognised but then known through his voice, the way he breaks bread, and the sustaining provision he makes for others. The gospel writers offer little if any detail about his physical appearance. Perhaps those details were not known. More importantly, those details were not relevant to the gospel writers' intention of proclaiming through the risen Christ the continuity of God's purposeful presence.

I write this as the cycle of seasons has left far behind the vigorous flowering of Summer. The foliage has mostly died back, the sculptures are coming out of hiding and the continuity garden has embarked upon a time of unobtrusive preparation for next year, and the year beyond that, and on and on ....

I've just planted some springtime bulbs and as I straighten up, my Mother's trowel held loosely in my hand, I almost catch a voice saying 'I hope you're going to clean that trowel before you put it away!'